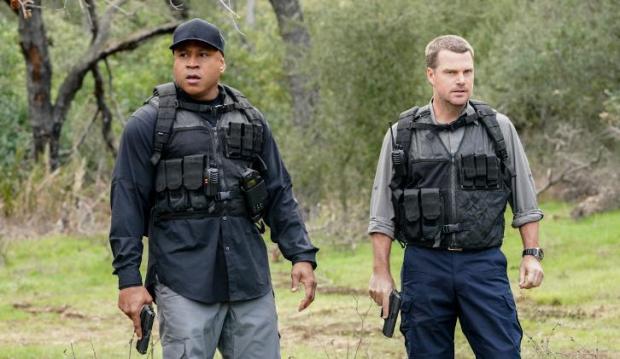 Title:  “Reentry”
Airing:   April 29th
Filming:  Mid-February.
What CBS is telling us:  Callen, Sam and Nell travel to the Angeles Forest to search for pieces of a failed rocket launch, including a top-secret government device. Also, Hetty tries to help Keane (Jeff Kober) acclimate to life in the states, on NCIS: LOS ANGELES.
What we think is happening:  Nell is out in the field for the second straight week while Hetty is trying to help Harris Keane come fully home.

Michael McMillian as Donald Jenkins
Was Henry Gibson in What I Like About You, Harper Sims in Saved, Steve Newlin in True Blood, Owen in Hot in Cleveland and Tim in Crazy Ex-Girlfriend.

Mary Hollis Inboden as NRO Chief of Staff Melissa Gates
Played Mary in The Chicago Code, Jackie Shope in Boss (a really underrated series) and Jodi in The Real O’Neals.  Guest starred in episodes of Speechless, Superstore and Here and Now.

June Schreiner as Vanessa Podrasky
Guest starred in episodes of Bosch Pure Genius, Criminal Minds: Beyond Borders and was Amy Barrett in the season 14 “Pay to Play” NCIS episode.

(She got the episode numbers wrong)

Travis Caldwell as Dave
Co-starred in The Gates as Charlie Monohan and was in episodes of Zoey 101, Women’s Murder Club, Miss Guided, Without A Trace, Parenthood, Gigantic, CIS: Miami, The Neighbors and Criminal Minds.

Worked as a sketch player for Comedy Bang! Bang!, Conan on TBS and ABC’s Jimmy Kimmel Live!.  Guest starred in episodes of All My Children, The Therapist, Jacked Up, Survivor’s Remorse, Almost 30, Whitney, Black Boots, It’s Always Sunny in Philadelphia, Being Mary Jane, Saints and Sinners, Ozarks, Blackish, Giants, The Inspectors and The Fosters.

Directed by:  Eric Pot directed “Resurrection”, “Windfall”, “Traitor”, “Internal Affairs”, “Home is Where the Heart Is” and “Forasteira”.  Pot is a First Assistant Director for the program.

Insider Intel:  None this week.

Today in having your photo taken with Daniela Ruah, Eric Christian Olsen and more:

I remember one of my first acting teachers, Brad Greenquist, always used to say..no matter how talented, how committed, how pretty how whatever you are, If you are not a kind person and fun to be around you'll have a tough time to survive in this industry. I had the most amazing time on set for @ncisla. Everybody brought their best, was kind and fun to be around. Special thank you to @danielaruah and @ericcolsen for being so welcoming and real. Congratulations on 9season!! And boss alias @mjtubert pleasure to meet you but I quit 🤕😫 I think I want to be an actor. Thank you universe and and now on to the next 🙏🏽 ——————————- #ncisla #losangeles #actor #alainwashnevsky #alainsky #findingyourvspot #alainsjourney #persian #vienna #manufacturegratitude

Working and hanging with the wonderful @danielaruah on the set of NCIS LA! #actorslife #lifeisgood #lovemyjob #aintitgrand

Today in having your photo taken with LL Cool J:

Run and gun cart. Lifting in and out of gators all day. #soundmixer #iatselocal695 #sounddevices #psc

Eric needs to cut down his sugar intake.

I’m thinking that fellow is going to owe Sam Hanna an apology when all is said and done.