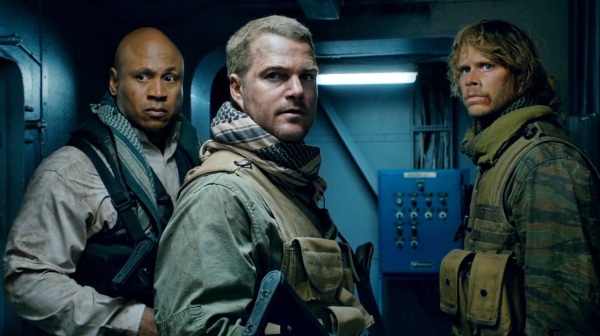 Sam had that exasperated look on his face that usually covered a deep concern or signaled he was pissed off. Callen decided it might be a little bit of both. They had silently communicated they wouldn’t leave Deeks on his own after Kensi had been flown to Germany. Callen had kept an eye on him while Sam had cleaned up and gotten checked out by the medical staff, returning with four dark stitches on the top of his head.

“He ditched you?” Callen smirked, toweling off the remains of his shower as the massive body of his partner filled the doorway of their assigned quarters.

The intense look he got in return silenced any additional smart remarks and he hurriedly dressed in the camo pants and navy blue t-shirt one of the crew had provided.

“The mess,” he replied quietly. “I sat him down and told him I’d get him a cup of coffee and when I came back he was gone.”

“How was he before that?”

Neither one had much experience with a silent Marty Deeks, but then again they weren’t with him that much of the time either. Maybe when he was with Kensi he shut up once in awhile, but he doubted it. The man had a comment or wiseass crack for just about everything, so watching him shut down like he had was troublesome. Sam thought he had a concussion at the very least and was suffering from shock, and probably had been since the crash. He hadn’t even looked inside their quarters, or taken a shower, and was still wearing the dirty and bloodied clothes and gear he’d come on board in.

“He needs to see a doctor,” Sam declared, his voice softening as he continued. “And he needs to talk about it all. Internalizing everything won’t help.”

“If it had been Michelle trapped under that wreckage..,” Sam’s voice faded as he shook his head. “He held it together though.”

Deeks had deflated right before their eyes after Asakeem was taken away. He had slumped against the bulkhead and stared down at the floor, his hand trembling as he ran it through his tangled hair. They’d both noticed the streaks of blood on his face, and Sam had tried to get him to see the doctor then, but he’d simply shaken his head and pushed away from the wall and walked off without a word. It had pissed Sam off, but he hadn’t yelled at him. He’d followed him and pulled him aside, talking softly to him and explaining the treatment Kensi would receive when she got to the medical facility at Landstuhl. Deeks had stared off into space as Sam spoke, but said nothing in reply. Sam had looked back at him, shooting him that irritated look he was quite familiar with when he wasn’t listening to reason, and Callen realized just how concerned his partner was for Deeks. He’d seen it right after the crash too, giving the worried man things to do to keep his mind off what had happened to the woman he loved.

Callen had admired Deeks’ control out there. He’d stayed focused and had worked tirelessly to get Kensi free in spite of the fear he’d seen in his eyes. They’d been a couple for a while, but watching him with her, as she lay unconscious made him realize just how much he loved her. In the beginning, he hadn’t been sure their relationship would work, and had cautioned Deeks about the risk, but watching him struggle to save her had made him realize how committed he really was. He himself had never really committed that deeply to anyone, even Joelle, the connection more on the surface as if he were simply playing at a relationship. But Deeks was truly all in and Callen worried what it might do to the man if fate stepped in to spoil it all.

They both had long ago accepted that eventually Deeks would become an agent, and a permanent member of the team. Sam especially was looking forward to hazing him a little when he finally signed those papers in his desk drawer he thought they didn’t know about. They knew he always had Kensi’s back in the field and theirs as well. He could drive them both crazy on a daily basis, but he was solid…a man you could count on in any given situation. But, it had stunned him when Deeks had urged them to save themselves, and he wondered if he actually believed they would leave them both there to face the enemy all alone. He needed to talk to him about that at some point. He couldn’t have him thinking he was the type of leader who would simply abandon members of his team when things got rough. Callen believed his offer showed a deep sense of loyalty and his willingness to sacrifice his life for theirs had instantly made him fiercely proud of him. Deeks had rushed in to save Sam once before, and the fact that he would do so again, for both of them, had touched him. As much as he should have expected it, he wouldn’t forget it.

“I think I know where he is,” Sam finally said as they headed down another narrow passageway.

“You gonna give me a hint?”

“He needs to see something familiar,” Sam replied.

When they walked out onto the fantail they found Deeks alone, leaning on his elbows over the rail, his fingers twitching nervously. He was staring out at the long, turbulent wake behind the ship, a stiff wind whipping his hair every which way, making it messier than usual. Sam walked up behind him, his big hand ghosting lightly across his shoulder before settling at the base of his neck.

“The coffee isn’t that bad,” Sam said with a smile.

He seemed slightly startled when Callen stepped up and leaned over the railing beside him and Sam moved in next to him on the other side. He could almost feel his exhaustion when he stood up and gripped the top rail, his left hand dark with dried blood.

“Is there news?” Deeks choked out the words, his eyes full of fear.

“No, no…Didn’t mean to scare you,” Callen replied gently. “Sam got worried when you ditched him.”

He returned to his previous position, but this time hung his head as if trying to gather himself, the wind and the rushing wake almost drowning out his somber voice.

“I should have known it wouldn’t last,” he said.

“The good times,” he replied. “I think I’ve just been waiting for something bad like this to happen.”

“Why would you think that?” Sam asked, turning to look over at him in confusion.

“After the internal affairs investigation was over…I kept waiting for the other shoe to drop…you know? Everything was too perfect…I was too happy.”

“You don’t think you deserve to be happy?” Callen asked, understanding more than he wished.

“Maybe…but, I never took it for granted,” He shivered as he stared blankly out at the sea and shook his head.

“Don’t give up on her now,” Sam finally said, squeezing the back of his neck before draping his arm across his shoulders.

“I’m not…its just…,” he choked out. “She looked so fragile…so small and broken lying there…not like herself…not like Kensi.”

“She loves you Deeks, and you love her,” Sam said. “You’ll both get through this.”

“But loving each other can’t change this,” he said firmly, his eyes glistening with barely held tears. “Even if she makes it this time, something like this will always be hanging over us.”

“You know it comes with the territory,” Callen reminded him softly.

“She loves what she does,” he replied, his mouth turning down as he shook his head. “She loves the action and the danger…all of it. Being an agent is who she is, and as much as I love her and want to marry her, I’m not sure she loves me enough to give it all up for a family.”

“I understand where you’re coming from Deeks. Believe me…I do,” Sam began. “Michelle and I went through the same thing…still do from time to time, but…”

“But she gave it up to stay home…to be a mother,” Deeks interrupted. “Kensi already told me she isn’t ready for that…and I’m not sure she ever will be.”

“You have to love her enough to give her time to decide,” Sam said quietly.

“She’s not the kind you can push into anything,” Callen said.

“Don’t you think I know that?” Deeks said numbly, his voice hollow as he took a step away from the railing. “I promised to always have her back…I promised her I’d get her home…and now…it may not even matter.”

“What if she doesn’t make it, Sam?” He asked, his eyes brimming with tears. “What if she never wakes up?”

“I know she is…and I want to believe she’s gonna make it…” He whispered through tears. “But…what if I lose her? What if it isn’t in the stars…what if it was never meant to be?”

“Bullshit,” Callen said tightly, pulling him around to face him. “Maybe in the beginning I might have believed that, but not now. You two drove all of us crazy there for a while…sniping at each other…hot one minute and cold the next. But then something happened and we all could see it before either one of you did. You two truly love each other, Deeks. Do you know how rare that is? What a gift it is to even say that…let alone believe it?”

“She’s a fighter and so are you. Don’t you dare give up now or spout all this crap about it ‘not being in the stars’ or whatever New Age bullshit you’ve read,” Callen was shouting at him now, and he saw a smile start to spread across Sam’s face. “I envy you Deeks. You found the love of your life and the stars had nothing to do with it.”

“All I’m saying is…Don’t get ahead of yourself and don’t think the worst,” Callen said as he calmed down.

“That’s the longest speech I’ve ever heard you make,” Deeks said, a hint of a smile flickering around his mouth.

“You’re not alone,” Callen said as he pulled him in for a brief hug. “We’re a team, remember?”

“Come on, Deeks,” Sam said, turning him away from the fantail. “The doctor needs to clean and stitch that cut on your arm before an infection sets in.”

“And you need a shower too,” Callen added. “You’re really starting to stink and I don’t want to be asphyxiated on the long flight back.”

“You don’t want Kensi to wake up to you smelling like Artie, do you?” Sam asked with a grin as he guided him inside.

Deeks suddenly stopped and sagged against the unforgiving gray bulkhead, whatever strength he had now fading fast, and both men reached out to steady him.

“I just want her to wake up and tell me she’s good,” he whispered.

“G might not believe in karma, Deeks,” Sam said softly. “But I do know that sometimes you just gotta have a little faith.”

“Yeah…okay,” he said softly, stretching to his full height and blowing out his breath as if preparing for battle. “If I have faith in anyone…it’s Kensi.”

22 Comments on NCISLA Post Episode Fan Fic: The Other Shoe