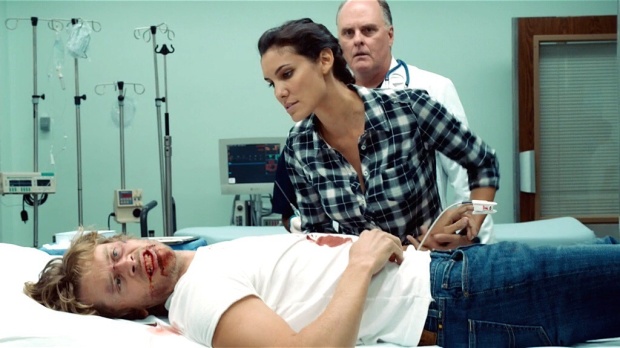 Here at wikiDeeks we dream of getting a chance to interview the man who brings Marty Deeks to life. There’s so much we’d like to know about his work on NCIS: Los Angeles. That day may never happen, but it’s still fun to think about. So our topic this week is the Top 3 questions we’d most like to ask Eric Christian Olsen.

The only rule I imposed on myself when choosing my Top 3 was that the questions be about Eric’s portrayal of Deeks on NCIS:LA, as opposed to other roles or his personal life. I did allow for follow-up questions.

In reverse order of importance, my Top 3 Questions for Eric Christian Olsen are…

#3. Sam and Deeks have always been a bit of an odd couple, albeit with fantastic chemistry. To what do you attribute the tension in their relationship? In other words, why didn’t Sam like Deeks? And how do your and LL Cool J’s respective approaches to acting affect the dynamic we see on screen?

Just like last week, I’m still thinking about Deeks and Sam. As I mentioned then, their relationship is what drew me full-bore into the fandom. We’ve heard Eric talk about working alongside LL Cool J and the larger than life personality he brings to the set, but I would really love to hear him describe what it’s like to work in front of the camera with LL. I’ve read that LL likes to stick to the script. We know that Eric doesn’t share that approach. Might that be part of what produces their impressive chemistry?

#2. At what point do you think Deeks became fully formed as a character? For example, in Season 1, he seems a bit more serious and reserved. By Season 2 Episode 3 (“Borderline”), he’s joking around, getting into trouble with Sam, and telling tall tales to Kensi. Then he became (in your own words) “a bit of a clown.” When did he finally achieve the right balance? How much of yourself worked its way into Deeks? Please comment on how the collaboration between the writers and yourself led to the Deeks we see today.

When I rewatch “Hand-to-Hand” and “Fame” from Season 1, and even “Human Traffic” and “Black Widow” from the beginning of Season 2, I do not see the same Marty Deeks we know and love today. It took a little time for the sillier aspects of Deeks’ personality to emerge. I like to imagine that Eric’s gift for improv worked its magic, and when the writers saw the end result, particularly the fireworks with Daniela Ruah’s Kensi, they began to actively write more funny lines and witty banter for both characters. But I’d love to hear straight from Eric about how his character evolved over time.

#1. The scene in “Ascension” when Kensi leaves Deeks in the garage was heart-wrenching. If their positions had been reversed, do you think Deeks could have done the same thing? What about later, at the hospital emergency room? And what do you think would happen if they were put in that position today, now that they’re in a committed relationship?

Yep, I’m still thinking about “Ascension.” At the time the episode aired, I was horrified that Kensi left Deeks in the garage, but I understood she was carrying out the mission. I was less forgiving at the hospital, when I liked to think that some of the other NCIS agents on staff might have accompanied Granger and Callen so she could stay and comfort Deeks. Deeks is so despondent in that garage scene, and if their positions had been reversed, I have a difficult time imagining Deeks leaving Kensi behind, even if thousands of lives were at stake. I’d love to see what Eric thinks about how Deeks would have handled that situation. I’d also like to hear his take on what was my #1 Most Wanted Scene and what would happen now if either one had to make a decision between the mission and their partner.

A few of the many additional questions I have:

Next week we’ll begin diving into topics that cover more than six seasons worth of Deeks (and Densi) goodness. We’ll start with a subject that just makes me happy to think about, the Top 3 Examples of Densi Banter.

In the meantime, tell us your Top 3 Questions for ECO. What would you most like to ask him?

11 Comments on The Top 3 Questions for Eric Christian Olsen