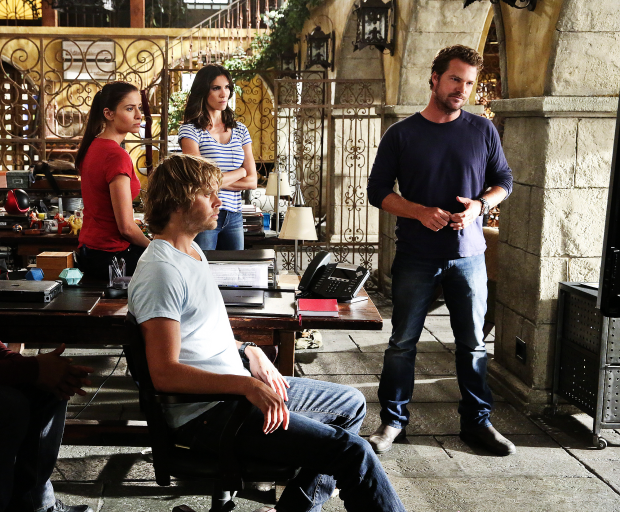 “Citadel” – DEA agent Talia Del Campo (Mercedes Mason) turns to the NCIS: Los Angeles team for help after her partner is murdered. Also, after Kensi grows suspicious that Deeks is hiding something, he surprises her by introducing her to his mother (Pamela Reed), on NCIS: LOS ANGELES, Monday, Sept. 28 (9:59-11:00, ET/PT), on the CBS Television Network. Written by: Dave Kalstein | Directed by:: Eric Laneuville

Now that the season’s kicked off, let’s jump right back into our favorite fictional escape. Ok, so there’s a murder to be solved along with needing to infiltrate a secure facility (not to mention a still folically-enhanced Callen. Yes, we noticed you, Angelic Bathmat!) A pretty typical case for the team (and us), right? While there was plenty of discussion this summer over the apparent struggle between the focus on the crime-based procedural drama versus character development, it appears as if The Powers The Be (TPTB) perhaps took note.

Yes, the team needs something to do, which requires having a “case on deck”! Yet, it sounds as if this episode in particular will place the case on the backburner. As Dave Kalstein stated in 2013, “It doesn’t even matter what the crime is anymore. It’s always character first and crime second.” Since this is a Dave Kalstein episode, we can easily expect this concept to be clearly illustrated.

Speaking of Mr. Kalstein, where he goes, so often does Densi also go. (Alright, this article has been written as calmly as possible to this point, but the excitement can be contained no longer! Feel free to picture Kermit the Frog and his famous flailing!) Talia’s back?! What the what?! Yet again, a professional associate needs the assistance of the Office of Special Projects.

Sure we can already start asking all the usual questions. Why was Talia’s partner murdered? How did it happen? How much does she really know? Those are the basics, but loyal fans are likely already digging deeper. Why is a DEA agent seeking help from NCIS? Does Talia have her own IA problems?

Then the professional and personal intersect. Who can forget the last interaction between Kensi and Talia? Somehow within the course of a single episode the look-alike feds went from throwing punches to being besties hanging at the mall. (Really?!) Now that there’s no question Densi’s thing is now a real Thing, will a solid line be drawn between the couple and their acquaintance? Or will the line continue to be blurred either purposefully or unintentionally by more than one of these colleagues? Oh the complexity of human interaction; the possibilities are endless!

Getting back to the reason that brings these three compelling characters together, which is a tragedy. If anyone is thoroughly versed in losing a partner (of many types), it’s certainly Kensi. Might the women bond over their shared experiences (not to mention their affinity for a certain scruffy blonde cop)? If Kensi is now confident in her ‘ship with Deeks, there’s no reason for her to not extend such support to Talia. We’ll see….

On the topic of support, it seems as if Deeks is going to need some – and plenty of it. The wildcard of Agent del Campo has re-entered Deeks’ universe. It’s expected that he’s going to be challenged in juggling not only his own reactions, but gauging the interactions with these two fiery women. (Don’t get burned, Detective!) Our Deeks is a masterful multi-tasker. He’ll be fine, right? Oh wait. What’s that? He’s going to need to juggle three women this week? So…?

Mom, is that you? Mama Deeks?! (Enter more flailing here.) Well Mr. Kalstein, there is a tanker full of explaining to do here! Where has Deeks’ mom been? Her last name is Deeks? Maiden name? Post-Brandel marriage? Was Gordon John Brandel really Deeks’ father? Was he adopted by someone else? Did they take on another name for protective reasons? Most importantly, how will the “Personal” next-of-kin issue be explained? Yep, we’re going all the way back to Season 2 in the NCIS:LA vault on this one!

Deeks’ Week: Well it’s already been pretty well outlined hasn’t it? Three women all seeking something different from him, interactions among them, and all of it ebbing and flowing in and out of work. His past crashing into his presumed future. And the unknown of the IA investigation still looming. This is certainly no day at the beach for our normally happy-go-lucky liaison. Who do you think is going to create the greatest challenge for Deeks?