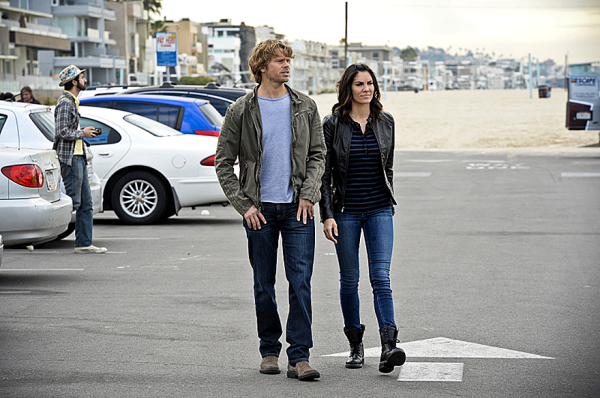 Ah, the filler episode. It’s the building block of a season, on top of which sit the episodes we look forward to the most, the ones where our favorite characters are personally impacted by the case. Not so for the filler episode. Instead it contains the same elements from week to week, the DNA that gives a show its personality. For NCIS: Los Angeles, that means bromance, banter, and action, oftentimes in the form of a boom (or at least multiple people getting killed). This week’s episode was classic filler. Writer Andrew Bartels and director James Hanlon checked all the boxes, and I felt adequately entertained as I await what looks like a hugely important Densi episode next week. We’ll talk about all that…

But First, The Plot

This story definitely took quite a few twists and turns as our team tried to find the killer of a tech billionaire named Larry Overson, an “angel investor” who seeded start-up companies. He had also worked for the National Security Agency where he developed a daemon, an undetectable software program that runs silently in the background collecting data on its users. Overson and his co-worker Mark Powell left the NSA and took their daemon with them, not wanting anyone, including the government, to be able to spy so easily. Powell’s falling out with Overson over money along with his presence at the crime scene make him suspect #1, but he diverts the team’s attention to a group of start-ups including Flibbit, which had the opportunity to find out about the program through Overson. Callen and Sam go undercover as angels to try to learn more. Eventually we find out that Powell’s attorney sold the daemon to a Pakistani ISI agent who infiltrated said start-up in order to deploy the program, even as he’s pursued by an Israeli Mossad agent undercover as the security guard. In a final twist, we learn that Powell did actually kill Overson when they fought over what to do with the daemon. That is a lot of story to tell, but Bartels efficiently squeezed it all into 42 minutes with time leftover for the banter.

Deeks and Kensi were plenty cute in this episode, with their discussion of Deeks being Monty’s “muttler,” (is that one “t” or two?) and Deeks’ flirty reaction to Kensi’s math skills. He definitely appreciates her intelligence as well as her strength, one of the characteristics I love most about him. But I think the best banter of the night might have been between Deeks and Nell. These two have always been great together; Nell’s sassiness plays off of Deeks’ playfulness so beautifully. I wish we could have more scenes with them together. (Of course, I think Eric Christian Olsen has tremendous chemistry with every single member of the cast.)

OK, there were no explosions. But Sam’s hand-to-hand with the Mossad agent on the roof was well choreographed. And we got a nice shoot-out at the end. While the woman Kensi took out didn’t seem worried enough about taking cover, I did think that Deeks’ shooting of the suspect was quite well staged. Deeks shot him so quickly after he started to pull out his weapon, I wasn’t entirely sure he had been armed at first. It gave me a momentary flashback to “The Debt”.

Sometimes the banter works, as it did with Densi in this episode, and sometimes things just feel a little off. To me, Sam and Callen’s discussions felt a bit strained. Even Granger noticed it. Perhaps that was intended. After all, Callen didn’t want Sam second-guessing his protecting Joelle, and Sam didn’t want to see yet another appearance of Lone Wolf Callen. Count on Deeks to defuse the tension with humor: Can I shadow you? It’s the only way I’ll learn. (But seriously, who lets their carpool partner drive to their house for nothing? I’d have been annoyed too!) The repartee was still there, but I didn’t feel it had its usual relaxed, effortless flow. It’s not the first time this season I’ve felt that way with these two, and I wonder if it’s been intentional on the part of the writers. Might they be setting up some sort of more serious rift between the two? Or maybe I’m over-thinking things (it definitely wouldn’t be the first time!).

Nell: Guys, I don’t do so well with boats. It’s the rocking and then the stomach, it’s not the best combination.

Deeks: You do realize that you are an NCIS agent, where the “N” stands for Naval? I don’t mean like a belly button kind.

Deeks: Where you going Gilligan?

Nell: I’m pretty sure marina security isn’t as cautious with their cameras… The “I” is for Investigative.

Deeks: See, you know what? If Silicon Beach was around when I was younger, I’m pretty sure I would have crushed it.

Kensi: Eh, I’m pretty sure you would have crashed it.

Deeks: But I am an idea man, you know this about me.

Kensi: I do, but not necessarily for complex computer programming.

Deeks: But I’d just hire those people. I’d have like an army of Beales toiling away in the data mine.

Kensi: And what are you doing in the meantime, just surfing?

Deeks: You know what? I’m thinking about getting Monty a butler.

Kensi: You are Monty’s butler.

Next week’s episode looks to be an emotional one for Kensi- and us- as her ex-fiancé Jack enters the picture. I know we’re all excited to see how she and Deeks deal with this difficult situation (and why Hetty has yet again sprung Jack on her unannounced). In the meantime, check out Deeks’ Surf Log and Kensi’s Journal, as well as the Edit of the Week. And tell us what you thought of “Angels & Daemons” in the Comments below!