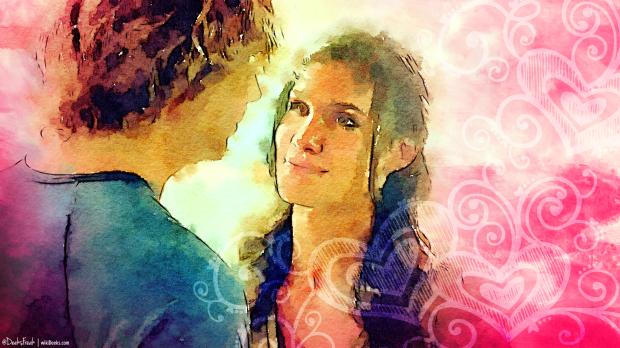 “You know how cheesy this is right? I mean, this is more my turf than yours.”

“Shut up,” Kensi sniffed, bobbing ahead for a moment to hide the slight embarrassment on her features, the pink blush that perfectly matched Valentine’s day, a holiday she typically only liked for the chocolate, but appreciated just a little bit more when it presented itself as a chance to show her almost fiancé just how much she truly did appreciate those nights he sat by her bedside, something she couldn’t have, didn’t when everything was in limbo, once the tables were turned and suddenly she saw herself as the fiancé who ran out Christmases ago, who left when the world tipped beneath him, and God, she’d been terrified that she wouldn’t be able to regain her footing, that the pain would trip her up, that she would pull down whoever she leaned against.

So yes, a scavenger hunt in one her favorite parks in Los Angeles was cheesy, probably silly, definitely something she didn’t want getting around the mission, but the ridiculous smile on his lips was well worth the blush touching her skin.

(And not so much of a hunt with her practically leading him to every object, but well, technicalities be damned.)

Though really, the tiny, fluffy, stuffed raccoon that sat perched upon a curve of the fence that overlooked the brilliant blue of the ocean tested her love of that smile, and how long he could hold back laughter.

“It’s for Monty,” she braced her forearms on the fence, breeze tugging a few curls free from her low ponytail, air chilly, yet entirely welcome, providing another rush of adrenaline that reminded her she was here, lucky to still be standing after what the past year, past decades truthfully, had thrown upon her, marks from zip ties still on her wrists, unhealed no matter how many times Deeks kissed them with adoration and pain reflected in his blue eyes, ones that held her utterly captive.

“I’m assuming this is referring to your raccoony mascara after you watch Rose let Jack go again, huh?” Deeks smirked, bracing a palm on her hip as he leaned in, brushing a kiss over her cheek, tone ringing with nostalgia and amusement. “And those homemade snickerdoodles for breakfast this morning, for old times sake?”

“I couldn’t get a flight to New York for a cronut this time.”

And God, he couldn’t deny the pang in his chest at the reminder, the panic of that day, the utter relief, joy even, when she was safe in his arms, laughing over him and his jokes, the vulnerability he’d witnessed fading away, still a sight he’d never forget; the first time he saw Kensi Blye with panic and fear in her beautiful eyes, the first time he saw her fragility, something she so carefully hid, only not from him, not anymore, not since the lasers, turkey burgers, and embraces, not since she saw him witness that vulnerability and still believe in her strength.

A strength she didn’t believe in herself for some months, one that was returning full force now, confidence back in her movements and the fire back in her eyes, his partner, Badass Blye, returning, and he couldn’t conceal his excitement, didn’t want to, not when they were finally emerging from a dark place, one that housed fear, insecurities, and withheld words.

“I love you, too,” Deeks shook his head, lifting up the fluffy toy and bouncing it in his palm. “For life,” he ended, humor heavy in his tone.

“Make it happen,” Kensi snorted, pulling ahead once again, away from the water and the thought of the ring hiding around their house, one she almost included in today’s plans, just to force his hand, only to leave it up to him, for now.

3 Comments on NCISLA FanFic: For Better Or For Worse