During a spring conversation with our delightful duo of Daniela Ruah and Eric Christian Olsen, the then-current issue of the DVD Commentary was highlighted. Like the previous year’s “The Frozen Lake” (5×10) selection, they were keen for fans to choose the episode. They spoke and the wikiDeeks team leapt into action with a fan poll! Like a great partnership, we spoke (via the poll) and they listened! It was soon confirmed “Expiration Date” (6×16) would reign supreme as the next gilded choice in the long line of illustrious (& often hilarious) Densi-focused commentaries.

Our discussion continued as they inquired what should be included in the commentary. I’ll spare you this writer’s ridiculous (although accurate) expectations based on past examples. Suffice to say by the end a chuckling ECO suggested the commentary receive a “Bingo card”, like those inspired by one of our contributing designers, the creative and talented @thewingsofnight (Allie).

With the proverbial ball back in our court, we now present to you the inaugural NCISLA Ruah/Olsen Commentary Bingo card! Based on past commentaries, this is our attempt at speculating what Team In-Laws might have in store for us when the Season 6 DVDs are released on Tuesday, August 18! What other guesses might you have? Grab your own DVD set and see if/how many Bingos you might be shouting! (I’m sure ECO will offer you a pony as your prize.)

Claim your square if there is mention of or reference to the following. 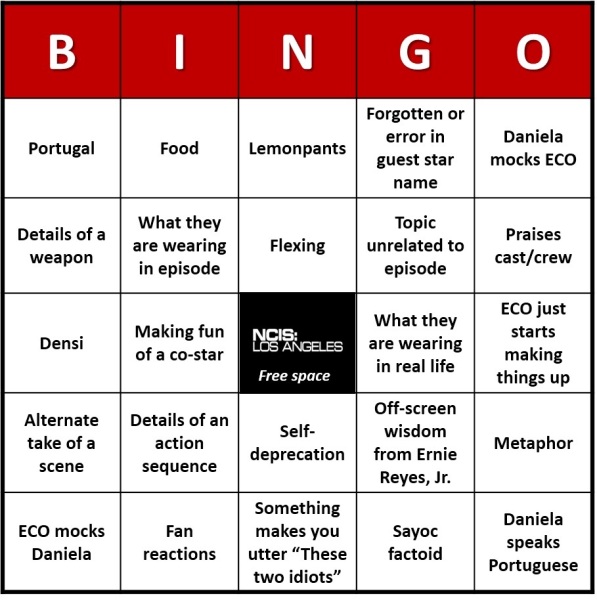