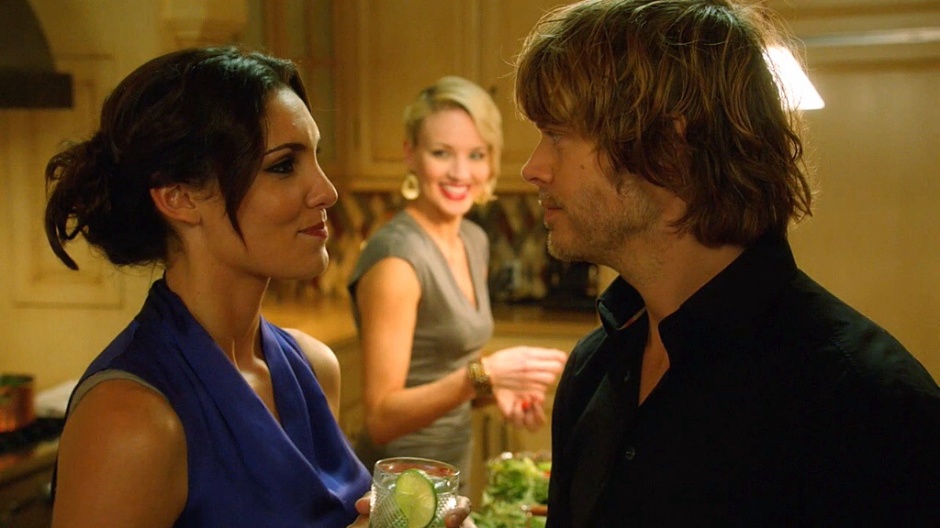 They may not be the best communicators, but Deeks and Kensi had a special thing right from their very first meeting. Their relationship developed ever so painfully slowly, but the result has been a long list of romantic scenes and one truly epic romance. But what are The Top 3 Romantic Scenes?

No special rules beyond the usual need for the discussion to be Deeks or Densi-centric. I will mention though that the existence of next week’s post, The Top 3 Sexiest Scenes, allowed me to focus on what I saw as more old-fashioned romance here.

This was not as easy as I expected it to be. Deeks and Kensi’s unconventional relationship has lent itself to many scenes I see as romantic. Some of them occurred before they were an official thing, and some before I think they were even officially friends. Many of them involved developments in the trust between them; it seemed that each time they made progress on this front, it was because one of them extended themselves and showed vulnerability to the other in a way that felt romantic to me. In the end, I chose two more conventionally romantic scenes, as well as one from early on in their partnership. In reverse order of importance, my Top 3 is…

#3. The non-proposal proposal at end of “The Seventh Child”

Written by Frank Military, “The Seventh Child” is one of his classic super dark episodes. Throughout, Deeks and Kensi have been having some amazingly clear communications about parenthood, with Deeks expressing doubts about becoming a dad. It puts them in a slightly sad position as the episode draws to a conclusion, unable to come to any agreement about their future plans. But then (just as he did at the end of “Ascension”, also written by Military), Deeks puts himself out there. He risks his heart by sharing something emotional and making a somewhat indirect marriage proposal, all because he can’t bear to see Kensi sad. It’s sweet. It’s imperfect. It stops her in her tracks. He looks terrified of her response, but her sassy reply (I’m not gonna say yes in the hallway at work without a ring on my finger) is perfect. How could you not smile at this scene, which was made all the more special because it wasn’t spoiled to fans ahead of time?

This one may not make many of your Top 3 lists, but I’ve always found Deeks’ support of Kensi here to be incredibly romantic. I don’t even think either of them was in love at this point in their partnership, but I find it hard to imagine Deeks saying these lines to someone he didn’t care about in at least a somewhat non-partnery way. Written by Frank Military and Christina M. Kim, this scene gives us a Kensi who’s doubting herself after watching the bad guy shoot their informant in cold blood. She gets a call from said bad guy asking her to meet him, and you can hear that doubt and I think a little fear in her voice as she tells the team about the call. (He wants me to meet him at his house? Says he has a job for me?) Nell warns her, “This guy is a cold blooded killer. You could be walking into a trap.” Deeks sees Kensi’s hesitation and goes out of his way to reassure her, saying, “I’m gonna be with you every step of the way. Even if you don’t see me, I’ll be there.” Rather than encourage her to pull out of the op, he supports her; he shows he respects her ability all the while wanting her to know that he has her back. It’s that respect that I’ve always found incredibly sexy, and the reason his line plays as totally sweet rather than over-protective. Plus who doesn’t want to believe that their special someone will always watch over them, no matter what?

Wow, I would never have guessed that Frank Military would be responsible for two of my top three romantic scenes. Who knew he was such a softy?

While I don’t expect many of you to list “The Job” in your Top 3, I’d be surprised if any of you leave this “Neighborhood Watch” scene off your lists. Written by Christina M. Kim, this entire episode is a fluffy Densi delight. But the scene in Brett and Polina’s kitchen is my #1 Romantic Scene of the entire series, as Kensi and Deeks have an incredibly meaningful exchange all while maintaining their cover. There are two aspects to this scene that I love. The first is, of course, that they both remember what the other was wearing when they first met. The undercover nature of the conversation allows Kensi to say, “I knew it was meant to be the moment I saw him.” And who doesn’t want to believe that their relationship is destined to be? What’s great is that Deeks provides actual proof that they’re meant to be, for why else would he remember what she was wearing?

But what I love even more than the remembering is the way they each deliver their lines. Kensi could make up anything here and keep her cover, but she blurts out the right answer in an adorable way. Then Deeks tries to pretend he doesn’t remember until he sees the disappointed expression on her face. Again, just like in my #3 pick, Deeks can’t bear to see Kensi sad, especially if he’s the cause. So he shares the truth with her, and we see her face light up. She, and we, can choose to think that it really was “meant to be.”

There were so many romantic Densi scenes to choose from! Among them:

As I mentioned, next week we talk about The Top 3 Sexiest Scenes. I was a little surprised by what made my list, and I can’t wait to hear yours.

In the meantime, what are your Top 3 Romantic Scenes? I expect to see a lot of variety here and am looking forward to seeing what you come up with.

Or go back to last week’s Top 3, The Top 3 Granger Danger Scenes.

22 Comments on The Top 3 Most Romantic Scenes