This week’s episode of NCIS: Los Angeles provided another strong team outing filled with banter and flirtation on the part of more than one couple. Written by Lee A. Carlisle and directed by Yangzom Brauen, it kept things on the light side, just like most of the episodes we’ve seen so far this season.

Longtime wikiDeeks readers know how bothered I can get when the show’s writers contradict past events to create a new reality for our characters. I’ll refrain from rehashing old complaints and just say how enjoyable it was to watch an episode where past history was treated appropriately. Carlisle has only been with the show since 2015, having started as a writers’ production assistant and working his way up onto the writing staff, yet he’s clearly been paying attention.

The first example involved the lovely initial scene between Nell and Fatima where Nell referred to a prior conversation with Granger. It was a conversation that most fans wouldn’t even remember, which made its inclusion all the sweeter because it was meant for fans like us. The callback to Granger’s advice to Nell to never belittle herself or her abilities was a wonderful way to remember Miguel Ferrer’s unforgettable character, her “old, somewhat cranky, but always wise friend,” and it showed how Granger lives on in all those he touched, who are now using what they learned from him to touch others. It was beautifully done and also reminded me of Carlisle’s other really touching scene to date, between Deeks and Roberta at the end of “Into the Breach” (and if you haven’t read Brenda’s very special review of that episode and that scene, do it now).

We also had a funnier callback to a long-running reference to Sam’s previous experience working undercover as a sommelier. He’s always been so proud of his certification so it was a fun way to show that he and Katherine have in common an appreciation for such fine things.

Finally, we got the other ginormous callback of the episode, to Deeks’ prior experience working as an exotic dancer (more on that below). Well played, Lee A. Carlisle, well played sir.

Love is in the Air

The Sam-Callen banter about cars was not my favorite part of the episode. It felt just a bit tired. But the more interesting part of this duo’s side of the story was that Sam appears to have found a love interest with Katherine Casillas. I’m happy for Sam to find a little brightness in his life. He deserves it. Carlisle showed that they both like the finer things in life, but I also liked her little story about working on an old Pontiac with her dad. I think these two have a future. I just hope she fades to the background since I don’t know how many stories can involve insurance, and a woman who doesn’t seem to have any self-defense skills.

A Deep Ocean of Secrets

We got lots of adorable Densi this episode. I enjoyed the initial banter over the career paths of their Internet personality/video game streamer person of interest. I also loved that Deeks got to drive his truck! And their serious exchange with Franklin Shapiro in the hospital about seizing second chances actually brought a little gravitas to the episode. 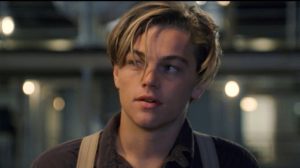 Kensi just seemed happy throughout, but of course nothing made her happier than the final reveal of Deeks’ exotic dancer identity. What a long-held secret, and I can’t believe no fan fiction authors ever came up with this brilliant idea (or at least none that I remember reading). Of course like most of us, my mind immediately jumped to Kensi’s ex, but my conclusion was that this was yet instance where canon had been overlooked, and just a thoughtless choice of name. But it turned out to be utterly and completely perfect. The look of pure joy on Kensi’s face was something we’ve rarely seen. It actually reminded me of Deeks’ initial confession to Kensi about his previous part-time employment, at a time when he had betrayed her trust and needed to make it right. At that time she took such glee in knowing this sordid secret of her then work-only partner. Now, finding out that her husband and her fantasy had somehow melded together, what could be better?

I will admit to feeling just a little queasiness at teasing Deeks over what he had to do to make ends meet, not to mention the humiliation of knowing that Kat, Mindy, Mandy, Tiffany and Tiffani will all know, but overall their banter worked so well, and Eric Christian Olsen and Daniela Ruah delivered it so well, that it bears memorializing here:

Deeks: Jack.
Kensi: Hmm?
Deeks: My, uh, my stage name was Jack.
Kensi: Jack as in my ex, Jack? Wait, is that why you didn’t want to tell me?
Deeks: What? No, not like your ex Jack. No, like Jack, from Titanic. You know, I wanna draw you naked Jack. [Kensi smiles gleefully.] What’s happening? What’s that look?
Kensi: Jack Dawson?
Deeks: Yeah. I mean, it was 1997, I was riding the zeitgeist wave, and I just didn’t wanna tell you ’cause I didn’t want to tarnish your favorite movie.
Kensi: Tarnish?!
Deeks: What?
Kensi: Tarnish? No [giggles], you could never tarnish, no I just really love that movie. I’m very excited did you have the hair?
Deeks: Did I do the hair, yeah, I straightened it and I parted it. If you wanna know the truth, I killed it. I mean, it was just like the ladies just slinging presidents.
Kensi: Do you still have the outfit?
Deeks: Of course I still have the outfit… Do you wanna talk about what’s happening right now? Because you’re like flush and then red-
Kensi: I am gonna talk but I’m gonna do it with Kat, Mindy, Mandy, Tiffany and Tiffani.
Deeks: No, let’s not do that ’cause this is my secret-
Kensi: They have known about this fantasy for a long time.
Deeks: -Because I have now given it it to you and it’s our secret-
Kensi: [Walking away and dialing her phone] Whew!
Deeks: -What I need you to do is lock it up and then take that key and throw it away like it’s the heart of the ocean, Kensi, if you could just… OK… Kens?

What did you think of “Concours d’Elegance”? Do you approve of Sam’s new love interest? Do you care if Callen ever gets another girlfriend? And how much did you enjoy the Densi?