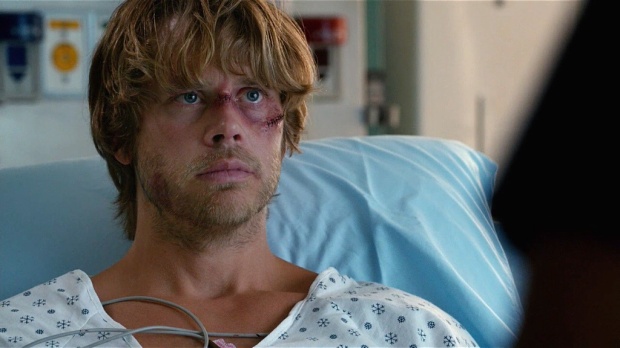 Today we’ll talk about the episodes we love the most, the ones we’d most want to keep with us were we to be stranded on a desert island (albeit one with a solar-powered DVD player).

It killed me to leave behind my all-time favorite scene (the end of “Impact”), but the rest of the episode is far from my favorite so I had to leave it off the list. I did gravitate to episodes with some serious Deeks-related angst (no surprise I’m sure), and also to those with some wonderful Densi banter. I ended up with a little of each. In reverse order of importance, my Top 3 is…

Written by Joseph C. Wilson, “Personal” was the first episode where I really stopped and paid attention to Deeks, and to the show for that matter. Prior to that, I always played it in the background while I did other things. But there’s something about a wounded Deeks that just speaks to me, so I listened. I watched as we saw his vulnerability, both physical and emotional. I enjoyed the gentle bantering between him and his partner. I watched his heroic rescue of Kensi (a Top 3 entry for Action!Deeks Scenes) in awe. I listened to his final talk with Hetty (the #1 Deeks/Hetty Talk) and was shocked at the revelations about his childhood. I watched the expressions on his face during that talk and realized that Eric Christian Olsen was a great actor. Then I went back and rewatched every episode from “Hand-to-Hand,” and watched every other television show and movie that Eric had ever appeared in, and my obsession began. How could I leave this episode behind?

Written by R. Scott Gemmill, this episode only made a single Top 3 list, The Top 3 Episodes for a New Densi Fan, but it was a finalist on many of them, including The Top 3 Examples of Densi Banter, Deeks Undercover Roles, Uses of Humor to Defuse Tension, Funniest Scenes, Funniest Episodes, and Best Written Episodes. I’ve written at length about why it’s an Essential Episode. For me it’s so essential that it earns the #2 spot.

There’s something downright joyful about the Densi scenes in the desert. I’ve always thought that it’s where these two actors, and the writers and showrunners, must have gotten their first full glimpse of what Densi could be. Their banter is strong right from the opening scenes on an L.A. street with an undercover Homeless Deeks, and then in Ops joking about hygiene. There are great discussions about pet snakes, and hilarious one-liners about Jason Bourne while under fire. We learn a little bit about each character’s backstory (even though Deeks’ version is not entirely truthful). These two characters are getting to know one another, and their “little ride” in the desert is where they too begin to see the first glimmerings of what their partnership could be.

With my #1 selection, written by Frank Military, we go from the potential of a new partnership to the shattered hopes of a post-torture Deeks. The angst of “Ascension” just kills me every time I watch it. Every single scene with Deeks breaks my heart. That’s why it earned two of The Top 3 Most Heartbreaking Moments. Eric is so incredible throughout, showing us how overwhelmed, how lost, Deeks is by what’s happened to him. Plus Deeks does finally get a long-deserved apology and kind words of support from Sam. On the other hand, this episode nearly made my Top 3 Frustrating Episodes list for all the scenes where Deeks is abandoned by Kensi, and I do fast forward through the lengthy Callen-Janvier cat and mouse antics, so the episode is far from perfect. Yet the angst is so powerful that I do believe it would be the last episode to be deleted from my DVR. Now, feel free to psychoanalyze me to determine why I enjoy sadness so much that I’d want it with me on a desert island!

This was a difficult exercise, as there were many other episodes I hated to part with. Among them:

Hmm, if only I could take 12 episodes with me, I think I’d be quite happy.

Next week this series comes to an end as we take some time to discuss our Top 3 Favorite Things about NCIS:LA. Think outside the box- your Top 3 can be any three things you want! Favorite scenes, favorite episodes, or something more intangible.

Until then… I can’t imagine that anyone else shares my Top 3 Desert Island picks. Let me know your version- which three episodes would you hold onto the longest?

Or, return to last week’s Top 3- The Top 3 Scenes that Sum Up Densi.