Expectations are always high for an NCIS: Los Angeles episode penned by Frank Military, and this week’s “Raising the Dead” was no exception. Directed by Terrence O’Hara, the episode may not have risen to the level of Military’s all-time best, but it provided the most interesting storyline of the season and delivered a gut punch of emotion courtesy of Eric Christian Olsen.

We expected the episode’s high points to arrive courtesy of Military’s creepy bad guy and Kensi and Deeks’ reactions to him, but surprisingly, it came from a different part of the story, with the scene of Nell giving Deeks the bad news that his liaison position has been permanently eliminated. And not only that, he’s too old to be accepted by NCIS.

I cannot get Deeks’ pained expression out of my head. Eric Christian Olsen was incredible in this scene, showing Deeks’ heart break as his world crumbles beneath his feet. The scene carries so many echoes of the one from “The Debt” where Deeks is “fired,” that it felt like it had to be deliberate on Military’s part. In both scenes, his NCIS boss tells him he’s been let go and he packs his belongings and leaves NCIS to return to LAPD. He carries his box almost like a shield that prevents anyone from trying to hug him. In fact, it’s at least the third time he’s been in a bad place in the bullpen and no one has given him a much-needed hug, with the end of “The Frozen Lake” when he finds out Hetty’s taken Kensi away from him and the end of “Ascension” being the other two.

The fact that Nell didn’t hug him and that he left alone, without acknowledgment from the rest of the team, and that his eleven years of contribution and sacrifice would end so ingloriously, felt so wrong. ECO’s portrayal couldn’t have been any more perfect, showing us Deeks’ shock, his desire to make sure Nell didn’t blame herself for being the bearer of bad news, and his need to get out of the mission without making it “a big deal.”

When he turns back around to take a final look at the one place he thought of as home before Kensi herself became his home, my heart clenched. It’s this vulnerability and humanity that ECO brings to his role that makes us love Deeks so much. His pain was palpable. And knowing that he probably just sees it as the other shoe dropping, the “universe-balancing, reality-checking, soul-crushing shoe” that drops when things are too good, that he believes he never really deserved for things to work out, makes the scene all the more devastating.

His final reaction, when Nell tells him he made everyone proud, communicates so much about his feelings. Leading up to that moment, the other team members’ bugging him to turn in his earwig, even if it was standard procedure, had to make him feel somewhat unwanted and unvalued, and likely contributed to his reaction here when he learned his departure would be permanent. He almost scoffs at Nell’s words that he made them proud.

Deeks: Uh oh, mom’s home. I’m leaving, don’t worry. This is my last box.
Nell: Deeks-
Deeks: It’s fine. I totally get it. You’re just doing your job and you’re amazing and I love you, and I’ll see you at the Squid & Dagger tonight.
Nell: Deeks, I have been doing everything in my power to get you reinstated, but it’s official. The liaison position to NCIS has been terminated… Permanently.
Deeks: Wait, hold on a second, what does that mean? Are you saying that I can’t, I can’t work here anymore? Like that’s-
Nell: Yeah.
Deeks: OK, well that’s, uh, Hetty?
Nell: Hetty has tried everything, exhausted all options. Unfortunately this isn’t NCIS’s purview now.
Deeks: Right.
Nell: This is all LAPD.
Deeks: It’s OK. You know, I was thinking about going to FLETC and, um, you know, becoming a real NCIS agent, which is great. It’s just frightening, I mean obviously, because then I start at the bottom of the pay scale and I lose all my LAPD pension, and now we’re about to close on a house and Kensi wants to- I wanna have a baby. We both wanna have a baby, it’s not that we-
Nell: Deeks, I don’t think NCIS normally takes people your age.
Deeks: Doesn’t normally, or never? [Nell shakes her head.] Because it feels like there should be an exception, I mean considering the fact that I was a lawyer and I spent eleven years here.
Nell: I’m pretty sure it’s never.
Deeks: Right, so-
Nell: I’m so sorry-
Deeks: You’re fine. It’s OK. I just don’t wanna make a big deal about this. If you just wanna let everybody know.
Nell: Yeah, of course I will.
Deeks: [Walks away and then turns back.] I’m gonna… I’m gonna miss this… And I think we did good work here.
Nell: We did great work.
Deeks: [Blows out breath] Alright, well, keep it up, make me proud.
Nell: You made us proud, Deeks, every day. [Deeks looks doubtful and turns to leave.]

This sequence was beautifully written. Frank Military walked Deeks through three of the four stages of grief in just a few minutes- from the denial of not understanding Nell’s words and thinking Hetty could still fix it, to the bargaining of feeling like he should be allowed an exception to NCIS policy, to acceptance. And it was beautifully acted, with ECO showing us Deeks’ mental journey while giving us a characteristic ramble and a trademark blowing out of his breath. For me, this was the most heartbreaking scene since the coma proposal in “The Queen’s Gambit.”

Silence of the Lambs Meets “The Silo” 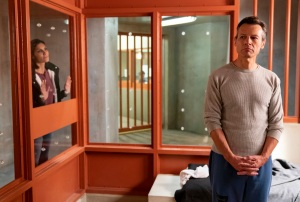 The episode’s much-publicized main plot followed creepy bad guy Frank Kessler, played by Frank Military himself, in his efforts to harrass, threaten, and otherwise try to toy with Kensi, who had put him in prison in a case that resulted in her joining the Office of Special Projects. The interplay between the two characters definitely held my interest, with Kessler establishing himself as an enemy to be feared. But even though he landed a few figurative blows when he used “touché” and talked about Kensi’s failure to have children, Kensi Blye was way too tough to truly be affected by his words. As a result, their scenes lacked the drama I think they were aiming for. It was the big difference between these two characters and the two from The Silence of the Lambs: where Clarice Starling was young and inexperienced, Kensi Blye has seen more than her share of bad guys and wasn’t about to let this guy worry her.

Of course, one couldn’t say the same for Deeks. In scenes reminiscent of “The Silo,” Deeks desperately tried to intercede in some way to protect Kensi from what he saw as a dangerous out of state assignment. Sadly, no chairs were thrown, but Deeks did a fine job of bulldozing his way into Ops, at least until Fatima called Callen on him. He could have handled the situation better for sure- I mean, the guy was safely behind plexiglass- but jeez, Fatima, couldn’t you have let Deeks listen in? In the moment, I reacted angrily on Deeks’ behalf, and I wonder if that moment will cause any tension between the two going forward. It would be interesting to see, although Deeks will likely blow it off and blame himself for overreacting (which he did).

Izabella Miko, the woman who played Kessler’s ex-girlfriend, handled her role well, planting just enough seeds of doubt to allow us to guess that she was hinky. And I do enjoy that Kessler is on the loose and bound to return. I only hope we get a follow-up where Deeks is the one he grabs as bait, allowing Kensi to throw some chairs as she races to his rescue. And that we get a resolution to this storyline faster than the still awaited resolution to “The Monster.”

I’m happy for ECO that he’s gotten time to bond with Winter, but I can’t wait for him to be back full-time. I need more Deeks!

That’s it from me. Tell us what you thought of “Raising the Dead” in the Comments below!